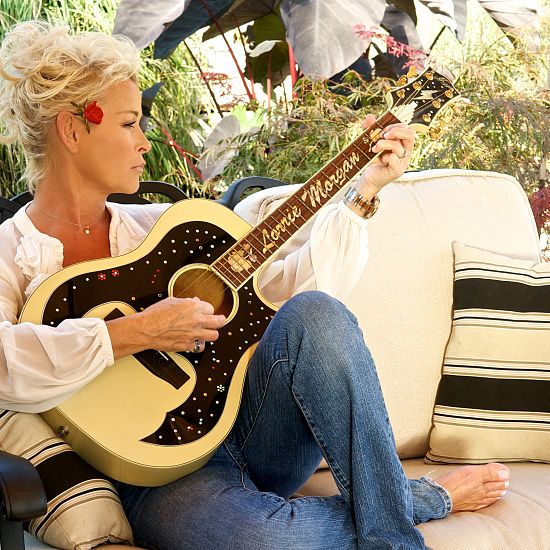 **Notice: Unfortunately, this event was canceled by Swamp Buck Entertainment. Be sure to check out our other shows**

Barely a teenager when she made her first, and everlasting, impression on country music fans, its legends and the community, Lorrie Morgan, a child of the Opry, staked her claim as being one of the youngest to have made his/her debut at the Mother Church of Country. Taking center stage at the Grand Ole Opry, alongside her father, George Morgan, young Miss Morgan performed her rendition of “Paper Roses.” –Lorrie Morgan, however, was no “imitation,” she was as pure and authentic as a freshwater pearl.

Three short years later, after her dad’s passing, Lorrie became a road warrior to launch her own career, touring with her father’s band. Walking in her father’s footsteps, she kept his memory alive while winning countless fans ensuring her rights to become a front-and-center entertainer. Applauded for her talents and commitment to country music and her heritage, Lorrie made history of her own when she became a lifetime member of the Grand Ole Opry at the age of twenty-four. Lorrie was the youngest person ever to become a member of the Grand Ole Opry.

Today, Lorrie has become the essence of country music femininity. Having blossomed from a bright-eyed Opry starlet to carrying the torch for many a lady trendsetter—Patsy Cline, Loretta Lynn, Tammy Wynette—Lorrie Morgan has become a renaissance woman of the genre recognized as royalty by her fans and her peers. Lorrie’s confidence in her sexuality opened the door for many a female artist who walked in her path; her glamour and grace brought “Hollywood” to the format.

Her whirlwind life and career have earned her valuable lessons and timeless stature among her peers and music enthusiasts and enabled her confident sense of self that shines through in her music like a late afternoon sunglow through the stained-glass windows of the Ryman Auditorium.

“One of my biggest struggles in the earlier years was to gain confidence in myself as a performer–to close a show behind a singer’s singer, an artist who was on the cusp of the cutting edge, or a known fan favorite. It took me a while to see myself as a stylist–that I no longer had to sing other artists’ songs; I could sing my own and create my own identity. I’ve finally grown into my own shoes and they’re mighty comfortable.”

Lorrie inked her first recording contract in 1988. As an RCA recording artist, and later on the roster of its sister label, BNA, Lorrie made her mark with what have now become timeless country standards, “Five Minutes,” “Something In Red,” “Watch Me” and “What Part Of No,” to establish her place as a bright and shining country star—a modern woman making country music history.

Lorrie’s success is defined by her love of a great song and ability to sell it. A woman made of character, stamina and, most importantly, embraced in a shadowy blue-green aura, her music is a reflection of her heart and life.

“There is no doubt, my personal life has, from time-to-time, grabbed more attention than my music. That’s sad in one way because there is no “how-to” book on life; we just live it the best we can and when we make mistakes, that’s all part of our growth. Everyone goes through growing pains. Whether in sad, painful, or in what may have appeared to have been dramatic times, I feel blessed to have experienced all of it–the emotions and the experiences. I make no apologies; I’ll take what I can use to teach my children, my grandchildren and share in my music.”

Over the past twenty some-odd years, as musical trends came and went and her personal life rose and succumbed to the turbulent, changing tides, Lorrie has remained true to herself—unshakable.

“I worked my ass off on Music Row.

Tryin’ to get on the radio

And I had to tell ‘em all where to go

When they tried to make me a pop star

I got me a honky tonk heart”

Those words say it all.

With a distinctive southern voice as traditional as the signature black cowboy hat he wears, Ray Scott garnered attention from “The Row” in the days before modern condos took over historic houses. Warner Brothers released his debut album, My Kind of Music, to critical acclaim and a top 40 single in 2005. But typical music business politics combined with a deafening change in the country radio market did not work in Ray’s favor. Or did it?

What followed from the label split two years later was the birth of the digital format and a “Rayincarnation” of sorts. Never one to quit on his calling, his own self-awareness fully emerged, and a new busload of fans joined him for the ride. For those seeking more than girls, beer cans and moonlight by the lake, Ray’s heartfelt vocals and down to earth lyrics resonated. Independent releases Crazy Like Me (2008) and Rayality (2011) not only gave him a physical product on the road but garnered a high number of digital sales and support from Sirius XM. “Drinkin Beer” and “Ain’t Always Thirsty” received SiriusXM airplay. And so did one of his most well-known singles, “Those Jeans” from the Rayality album, produced by Dave Brainard (Jerrod Neimann, Brandy Clark).

Then came his 5th studio album in 2017—Guitar for Sale, produced by Michael Hughes.

“I appreciate that he’s the most stubbornly genuine artist that I know – a guy who refuses to compromise or follow any other inspiration other than his own feelings and experiences. He doesn’t give a damn about what anybody else is doing, he just wants to find and execute his vision, “says Michael.

So then, it’s no surprise that the two friends paired up again for Honky Tonk Heart, the new EP out March 1. With catchy electric and steel guitar licks from the get-go, you’re in for a boot steppin’, whiskey drinkin’, feel good time. But don’t mistake the two smoky bar tunes (Honky Tonk Heart, Trainwreck) for fluff pieces because Ray is anything but. If he sings it, it’s because he’s been thru it, he believes it, or he currently lives it (or sometimes all three). His rip roarin’ honesty is just as strong in the ballads as it is in the uptempos. Ray’s vulnerability resonates with the most heartbroken, yet hopeful of souls in “It Is What It Is” and “Leave this Town.” The EP comes full circle, ending on a sweet love note with “Thank You Baby.”

“’Honky Tonk Heart’—the song—is my life, and it’s an ode to all the troubadours like me runnin’ up and down the highways doin’ what we do for the love of real country music, ‘cause it’s what we bleed. My new Honky Tonk Heart EP is the first glimpse into a new era of creativity that kicked in just after the release of Guitar For Sale. I’ve been crankin’ out one new song after the other in the last couple of years. I can’t wait to lay ‘em on ya. There’s a lot more to come. To quote one of the new titles, I ain’t ‘Nowhere Near Done’. . . . see ya’ll out there soon!” —Ray

Megan cover’s your favorite country tunes, new & old. From her live performance you will be able to tell that Miranda Lambert is her favorite artist.